Jacky Lloyd grew up in Johannesburg. A 4 year BA degree in Jewellery Design at University of Stellenbosch was followed by a professional career as a studio jeweller in Cape Town.

In 2017 she moved to Riebeek Kasteel where she built herself a sculpture studio. Working in bas-relief and 3-D format, she carves from Carrara ‘statuario’ marble and fine-grained sandstone, with occasional inclusion of found objects. Lloyd’s themes include South African narratives around multicultural influences, the potentials and limitations within a transitional society.

Her current work focuses on portraits of real South African middle aged women whose achievements have accumulated into impressive professional expertise. This relatively new phenomenon for women is presented in bas-relief, a format historically celebrating male narratives of conquest and memorial. Clothing as a form of identity is layered with the Classical Greek method of defining form through drapery. These are portraits of current day heroes. 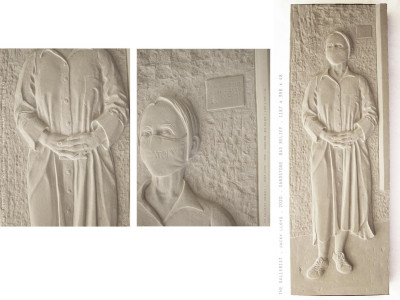